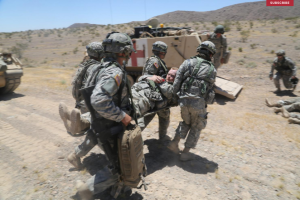 “The war on terror has had no coherent plot, only jarring disjunctions of cause and effect, time and place.” – George Packer

“The object in war is to attain a better peace—even if only from your own point of view. Hence it is essential to conduct war with constant regard to the peace you desire.”  – B.H. Liddell Hart

War serves itself if there is no strategy to guide and constrain it.  The purpose of strategy is to fulfill a political purpose and that purpose should relate to an end that sees a better peace than before the war began.  The means and methods, or the instruments of power and the ways they are employed, should align to achieve the political object sought at the costs and duration the state is willing to bear.  If war brings more enemies and perpetual war, strategy is flawed.

The U.S and its allies have been fighting terrorists and insurgents for almost 16 years.  America has the best-equipped, most-seasoned, and best-led forces in its history.  The forces of Team America have won a number of battles, conducted a host of strikes, and killed or captured many terrorists, including Osama bin Laden.  Yet there are more murderous Islamist groups around the globe today than there were on 11 September 2001, and there is a strategic stalemate in Afghanistan.  Team America is adept and upbeat about doing lethal actions to kill and capture militants.  But, Team America does not have a viable strategy.

There is a marked contrast between the approximately $500,000.00 that al Qaeda spent to prepare and carry out the 9/11 planes raids and the about two trillion dollars that America has spent in reaction to the attacks on 11 September almost 16 years ago.  This is a modest accounting.  The country is still spending and still fighting.  We can win battles and kill individual leaders in perpetuity but without a policy and strategy match, these disruptive actions are fleeting.  Efforts to defeat Islamist terrorists around the globe remain incomplete and uncertain.  Many of these non-state enemy groups espouse the virulent religious-political ideology of Salafi-Wahhabi-Jihadism.  Bombs and bullets alone can’t defeat this.

This creed animates the will of an ever-increasing number of zealous murderers who view the world in apocalyptic and binary terms where they, the true believers of their true-faith prophet, must compel the rest of us non-believers, to believe what they believe, or die. It is time to for some sober thinking to replace the sanguine platitudes about the prospects of ‘winning’ against the panoply of Islamist zealots and militant groups that have multiplied and become even more lethal and brutal since September 2001.

American policy and war suffer from a strategic attention deficit that goes back to the ill-thought out support of the Pakistani Inter Services Intelligence (ISI) and its most abominable strains of Islamist proxies among the mujahideen factions in the Soviet-Afghan War of the 1980s.   The current perpetual war against an increasing number of Islamists and the stalemate in Afghanistan derives in no small way from this strategic attention deficit. The U.S. has been involved with wars and Islamists groups not for 16 years, but for at least the last 38 years.

For 11 years, beginning just after the Soviet invasion, the U.S. approach might be characterized as strategic epilepsy. It was American policy to fund and support Pakistan’s ISI to support Islamist insurgents to defeat the Soviets.  Guns and money went to the most odious strains of Islamist surrogates to bleed the Soviets and erode their will, without concern for the long-term consequences.  For the subsequent 11 years, from around 1990 to September 2001, the U.S. policy toward these groups manifested what one analyst characterized as strategic narcolepsy. This meant generally ignoring South Asia’s Islamists while Pakistan continued to support and collude with the Taliban and al-Qaida.  Since 2001, the U.S.-led Coalition has been fighting some of the same Islamist groups that American policy had helped nurture.

The 9/11 attacks returned the U.S. to strategic epilepsy.  With little strategic analysis and no credible long-term plan for peace, the U.S.-led war effort used small numbers of Coalition forces and Afghan warlord militias to chase the Taliban and al-Qaida to Pakistan, only to see the latter regenerate and fight another day.  Then, with the Afghan war far from finished, the U.S made the colossally unwise decision to invade Iraq and turn a problem unrelated to the 9/11 raids to a major and related problem of great magnitude. Iraq was an unnecessary secondary theater weakened the United States effort and emboldened the cause of its enemies.

Since September 2001, a number of times, the maladroit use of violent means by Team America’s special and conventional units have helped contribute to a condition of perpetual war where actions to decapitate, disrupt, and defeat terrorists seem to proliferate more Islamist militant terrorists to decapitate, disrupt, and defeat.  Killing too many of the wrong people in Afghanistan and opting to invade Iraq catalyzed an increase in terrorism rather than countering the strategy and undermining the will of al Qaeda and militants of similar ilk.  Iraq itself generated another steady stream of Islamist fighters.  Invading and occupying Iraq was malfeasant at every level.

Defeat, in its essence, demands taking away the capacity and will of enemies to such an extent that they perceive they are defeated and quit.  If America continues to focus on capacity through violence while failing to undermine the will of its enemies then the creed will continue to animate and proliferate a deep and wide bench of current and future jihadists.

To create some prospect for ending this long war, or even to avoid ending this badly, within some reasonably foreseeable future, the U.S. national security leadership should seriously revisit the meaning and need for a strategy with an end that envisions peace.  Defeat, or to use the current and more hyperbolic notion of annihilation, would require a strategy to undermine both the will and capacity of al Qaeda, DAESH, the Taliban, and the states that provide material, ideological, and sanctuary support, like Pakistan.

What is necessary for the long term is a well-thought out and sustainable counter-ideology strategy that is clear eyed and ruthless about shutting resources such as the funding, the madrassas, and non-state organizations that propagate the Salafi-Wahhabi-Jihadist creed.  A viable long-term strategic solution must also rely on diplomacy, trans-regional cooperation, and local political solutions that reduce or remove the underlying reasons for the real and perceived grievances that catalyze support for violence.  Until America musters the will to shutdown sanctuaries, counter the ideology, and address the root causes, there will be no end in sight.  The violence between Team America and jihad will continue to serve and feed on itself.

It is unreal to think that the West can do nothing without consequences.  For the present, America along with its allies and partners are not winning, nor defeating, but disrupting a host of odious head-lopping fanatics.  It is not strategy but it is possibly better than doing nothing, as long as tactical actions and operational campaigns avoid killing the wrong people and do not create a lot more enemies.  Until the West finds the will and the wherewithal to shut down sanctuaries and incubators like Pakistan and Saudi Arabia, and helps address the root sources of grievances, Team America will continue to kill and capture an infinite bench of jihadists bent on destroying secular people and societies.

Robert M. Cassidy, Ph.D., is a retired U.S. Army officer who has served in Afghanistan, Iraq, and elsewhere in that area.  He has written books and articles about war and Afghanistan.  The views in this article are his own and do not represent the views of the institutions with which he affiliates.